It is with deep sadness that I write to let my Watershed friends know that my sweet mum passed away on October 22 at exactly noon.  Many of you knew that she had been diagnosed with metastatic lung cancer in May.  She was fortunate to have had a chance for some experimental treatment that helped her to remain clear mentally and she was not in pain nor was she on any major medication.   This was a complete blessing for her.

Despite struggling with her breathing she did manage to learn to use a walker and her oxygen tank and was able to visit New Hampshire a few times over this summer and even enjoy a picnic at the Larry Leavitt preserve where we toasted a glass of clear water to Larry and Jackie who she had known. 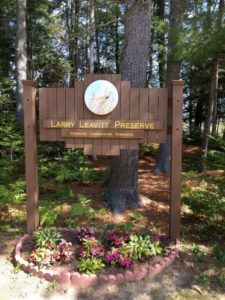 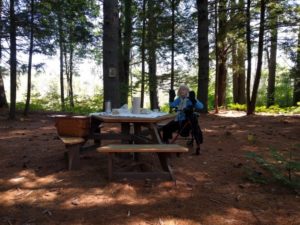 Her close friends know it was a struggle for her to remain in her home and know that she was so grateful to move into the apartment at Fresh Pond in September where she once again was able to get outside and get about on her own from her apartment to meals and to her sweet bench by the Pond where she walked for decades. Her new apartment was surrounded by “fluffy open space grasses” that    were butterfly meadows and conservation land. 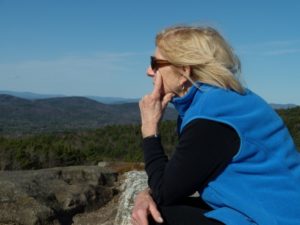 Esther B. Folts contemplating the Watershed from Foss Mountain, Eaton.

What many of you do not know is the amount of volunteer work she did for GMCG and the synchronistic connection between her recent apartment and butterfly meadows and this organization—two stories that will grace this post today as well as deep appreciation to all that my mother taught me about nature and the Earth—she clearly set my path towards the conservation work I do today. Esther was born in 1933 in Schenectady, New York to immigrant parents from the northern region of Italy, Friuli. Like others from “the old country,” they raised and preserved their own food, gathered mushrooms, made their own clothes and honored their heritage by preserving holiday customs through special foods from their region. I grew up with a strong understanding of their connection to Nature and the Earth. My first experience hiking was with these grandparents when I was ten in their mountains near the Dolomites.

Esther graduated from Syracuse University with a degree in English and a minor in Art. She was passionate about language and grammar and when GMCG was just forming, I knew she would be the perfect person to help edit and proof our quarterly newsletters as well as many of our grants. While she sometimes would joke about the “bed time reading” aspect of some of the more science based articles, she was one of our biggest supporters and champions and was the rock in my life during many hard advocacy campaigns. She attended many annual meetings and educational events, joined in some of the planning board meetings that we participated in and with sketchbook in hand, helped explore some of the protected lands across the Watershed. 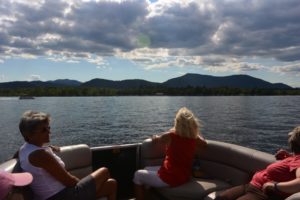 Enjoying a tour of Ossipee Lake during Watershed Weekend.

It was a synchronistic event for her to join GMCG at Fanueil Hall in Boston to celebrate GMCG’s 2006 Environmental Protection Agency Environmental Merit Award for Non-confrontational advocacy.

That year, not only was GMCG honored with this prestigious annual award, but a woman from Esther’s neighborhood, Ellen Mass, who she deeply respected for her work to preserve Fresh Pond, the Silver Maple Forest and as President of the Friends of Alewife Reservation, was also honored. 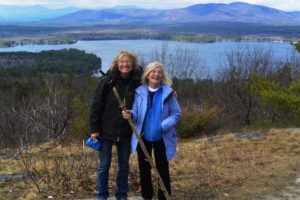 Blair and Esther on Province Mountain with  Province Lake and
Green Mountain in the background.

When my brother and I were very young, every spring our Mum would take us out walking to pick the first blossoms of the willow tree.  Winters we would explore the Audubon Land near her home where we would build stick forts and play “Vikings.”  Summers we would spend days on the beach crawling through tidal pools, collecting shells and swimming.  The most important thing she taught me was that “we only pass this way once” and hence we need to pay attention to every detail and “savor it.”

The hole left in my heart can never fully mend, but with time, the life she shared may become a thread in my own tapestry towards stewardship and advocacy.