The Ossipee River Basin aquifer is the largest stratified drift aquifer in New Hampshire. Made up of sandy soils and gravel particles, the aquifer has both a large storage capacity and high recharge rates, which allow precipitation or runoff from the land surface to quickly replenish water supplies. The characteristics that make the Ossipee Aquifer very productive also make it very vulnerable to pollution from the land surface. Consequently, land use practices in specific parts of the watershed have the potential to significantly impact the drinking water quality.

In 2007, Green Mountain Conservation Group began the Source Water Protection Project to protect groundwater within the Ossipee Aquifer, which serves as the major source for drinking water in the region. The Ossipee Aquifer Steering Committee (OASC) was formed, consisting of stakeholders from the six watershed towns, Freedom, Madison, Tamworth, Ossipee, Sandwich and Effingham. 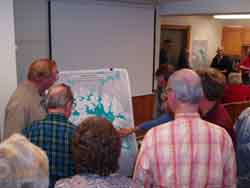 In 2008, watershed surveys identified 139 Potential Contamination Sources* (PCSs) among the six watershed towns, with 76 located directly above the Ossipee Aquifer. Further, 16 of these PCSs are located within wellhead protection areas for public water systems. These business and facilities were invited to participate in Best Management Practices* (BMPs) surveys, site visits, and were provided information about drinking water protection. 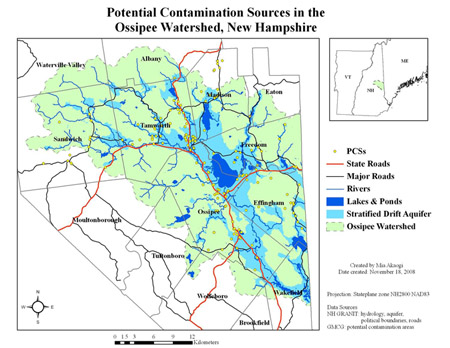 Map of 139 PCSs within the Ossipee watershed, as determined by watershed surveys. 76 PCSs are located directly above the Ossipee Aquifer.

*Best Management Practices (BMPs): Strategies for preventing the release of hazardous regulated substances into the ground to decrease the potential of groundwater contamination. 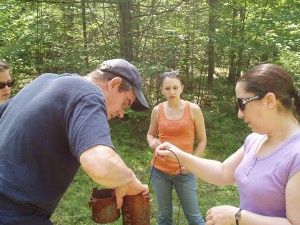 Dr. Robert Newton of Smith College offered his lab to assist with groundwater monitoring efforts and provide a snapshot of drinking water quality and quantity in the Ossipee Watershed. In 2009, GMCG tested water from 60 wells for private residents, businesses, and public water suppliers to collect baseline data on the quantity and quality of groundwater in the Ossipee Aquifer. One quarter of the wells were salt impacted from road salt. Dr. Newton is also monitoring water levels at a USGS well located in Freedom to better understand water levels of the aquifer throughout the year.

This project began in 2009 and is designed to address present and potential threats to water quality in the Ossipee Aquifer watershed in the Lakes Region of New Hampshire, and assist the towns of Sandwich, Tamworth, Ossipee, Effingham, Freedom, and Madison in long-term planning efforts to protect their drinking water resources. The Ossipee Source Water Protection Project was developed due to concern for the long-term quality of the drinking water supplies in the face of noticeably increasing growth projected by NH’s Office of Energy and Planning. The Green Mountain Conservation Group (GMCG), Ossipee Watershed Coalition (OWC), municipal planning boards and conservation commissions, and Lakes Region Planning Commission (LRPC) are partners in ensuring the aquifer resources are protected for current and future generations.

Commercial and industrial zones are situated over a substantial portion of the aquifer along the major transportation routes. According to NH DES maps prepared in 2001, over 78 potential contamination sources (PCSs) are within well head protection areas. Upon completion of the PCS inventory by GMCG in December (2008 Source Water Protection Report), we anticipate an increase in the number of PCSs. Thoughtful planning which works to balance growth with water resource needs will assist these communities maintain the integrity of their water resources into the future. Water resources do not typically follow municipal boundaries, and for this reason the project is based on a collaborative, regional approach.

The Initiative will build on the Natural Resources Planning Guide for the Ossipee Watershed published in 2007 (See https://gmcg.org) and the comprehensive inventory of PCSs completed by the GMCG in December of 2008. The inventory and outreach campaign has generated greater understanding of source water protection, GIS maps of potential risk sites and a willingness to address contamination threats at the local level.

Links to the associated outreach materials, guides, meeting documents, and town websites are below.

Final Report of the Governors Commission on Water Sustainability – Dec 2012