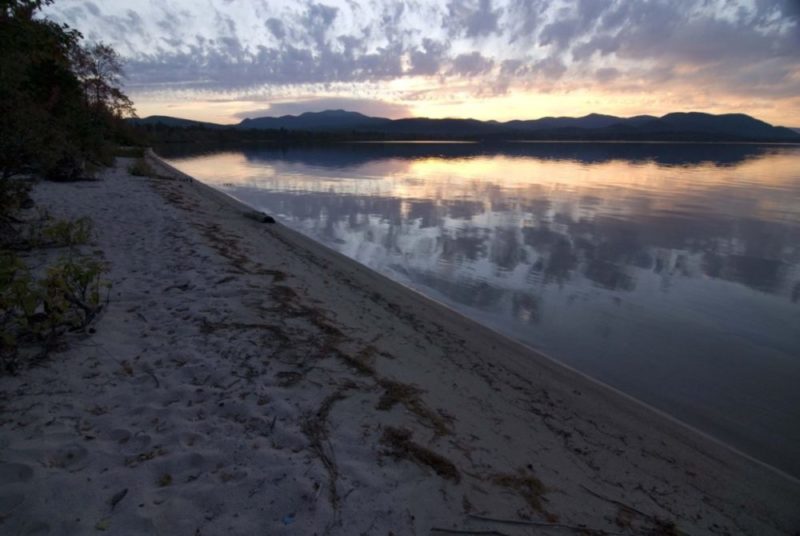 Ossipee Lake Natural Area and sunset over the Ossipee Mountains

If you have been lucky enough to be out on Ossipee Lake, then you know about the amazing expanse of white sand beach, peat mats and unique plants that are found there. Located on the southern end of Ossipee Lake, this shoreline receives big winds from Mount Washington in the north.  These winds and disturbances have helped to create a rare pond shore community of plants including hairy hudsonia and fine grass-leaved goldenrod.  In a document from New Hampshire Heritage Inventory from 2000, it states:

“This large poor level fen/bog ecosystem forms the north end of one of the state’s largest peatland complexes, which extends over two miles southward from the south end of Ossipee Lake.  The peatland complex is formed on the broad outwash and lakebed deposits of the Pine River-Ossipee Lake sand plain.  A coastal sand plain pond shore ecosystem occupies the narrow beach strand along the lake-border. 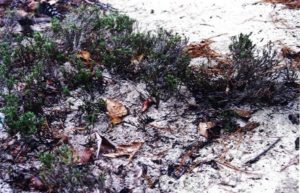 The Ossipee Lake Natural Area managed by NH Department of Resources and Economic Development (DRED) occupies 400 acres east and west of the Pine River at the south end of Ossipee Lake.  Approximately 80 percent of the property is a poor level fen/bog system, which is rare through its range. The shoreline is a sandy pond shore system, comprised of four rare and imperiled natural communities. Two of the communities are globally rare.   ……At least one area at this site contains the state’s only known population of Betula pumila (swamp birch)…”

In 2001, GMCG learned from volunteers and boaters that there was a lot of abuse going on here. Visitors were locking their belongings to trees and coming back the following weekend to use them again.  Volley ball nets were left installed in the water, rafting was prevalent and boaters were depositing debris such as chicken bones and corn cobbs into the water.  There were make shift “latrines” installed in the bushes and basically there was absolutely no stewardship of this unique area.  On a visit to the area with the then Commissioner of NH Department of Resources and Economic Development, Commissioner George Bald,  it became clear that DRED had had no idea what was going on at the Natural Area.  This lack of respect for the land combined with the fact that there are over 40 rare plants that all come together to form this pond shore community began a unique dialogue created and fostered by Commissioner Bald that combined NH Heritage Inventory, DRED, Camps and businesses on Ossipee Lake, GMCG, NH Fish and Game, NH DES, OSP, Ossipee Lake Alliance and the boating community to form the Ossipee Lake Natural Area Working Group. 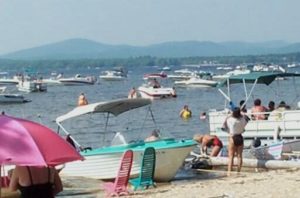 During the summer of 2003, GMCG partnered with Ossipee Lake Alliance to document the amount of use and misuse taking place at the Natural Area. On one Summer Saturday over 300 boats were reported rafted and on the shore at this fragile shoreline.

Fast forward to 2017—– the boating community has been instrumental in both educating visitors to the need to “recreate with care” and policing this fragile area.  Visitors have learned about the rare plants and have been much more respectful about the shoreline.  NH DRED has posted areas that are open for day use and has posted areas that need to be left alone.  For the most part, visitors have respected this.  While the peat mats may not come back, the harry hudsonia and other plants ARE slowly coming back.

One tiny day and one person at a time we can make a difference…..