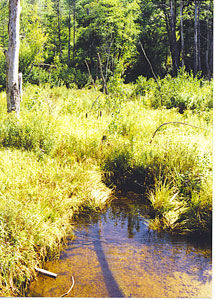 Through an anonymous donation in 2000, the Green Mountain Conservation Group purchased 41.09 acres of important aquifer protection land on Route 25 in Effingham.

The interest in protecting this land began in 1999 when a waste management company sought to locate a commercial trash transfer station there. An informal group of area residents, K.E.E.P.O.U.T., opposed this proposal, and worked to educate others about the important natural resources on the property and in the surrounding area. The Green Mountain Conservation Group supported the efforts of this group and worked with them to urge the New Hampshire Department of Environmental Services to deny this application primarily because of its close proximity to the largest stratified drift aquifer in the state.

ROUTE 25 FROM ROUTE 16 TO THE MAINE BORDER IS A VERY IMPORTANT CONSERVATION CORRIDOR.

While GMCG’s main involvement focused on the importance of the aquifer, there was an equal concern with the important conservation land stretching from Route 16 to the Maine border along Route 25. Because this route is along a state highway, it appears to be a prime location for commercial development. However, in looking at aquifer and conservation maps one sees that quite the opposite is true. This section of road is home to important conservation lands that include:

The Society for the Protection of NH Forests land includes the High Watch Preserve (1035 acres), The Riverlands Preserve (300 acres and includes nearly 2 miles of frontage on the Ossipee River as well as on Loon Lake in Freedom. The total SPNHF land in this area is 1794 acres.

Audubon Society of New Hampshire also has a strong presence along Route 25 and the Ossipee River and owns and protects 404 acres in the vicinity, including an important peat bog and frontage on the Ossipee River.

The Nature Conservancy also has a strong presence in this region with an interest in the Ossipee Pine Barrens, a globally rare forest.

In 1995, the EPA sponsored a statewide effort to identify the most important natural resource areas in the state. The Ossipee area was identified as one of the six areas with the highest concentration of important natural resources. The study states: “The Ossipee Lake area overlies the state’s largest stratified-drift aquifer, a very significant water supply resource. The area also supports a number of very valuable wildlife habitats. The Pine Barrens is NH’s only remaining intact occurrence of a globally rare and threatened natural community. There are several globally rare pondshore communities, threatened and endangered species and three tracts of old growth forest in the area. The region is a large and relatively undisturbed glacial sandplain containing a complex of peatlands and unusual sandplain forests with remarkably high invertebrate and natural community diversity.”

This habitat type is also known to support several species of concern that were identified in 1995 as high priority by the NH Partners in Flight Working Group. These include the common nighthawk, whip-poor-will, brown thrasher, and eastern towhee. In addition, several endangered species of butterflies and moths are limited to this natural community type.

Nearly 90% of the land critical to protecting NH’s public drinking water supplies is vulnerable to development and contamination and only 22% of the state’s high-value wetlands-critical for wildlife and recharging of aquifers-are protected. Not only is the conservation land on Route 25 in Ossipee, Effingham and Freedom important for its water and natural resources, but also for the economic development of New Hampshire. This land may play an important role in future water supply for the state and may help the state fend off expensive water problems�This land is also important for tourism. Almost all of this conservation land is open for hunting, hiking, boating and other forms of recreation. State organizations, non-profit organizations and volunteers have spent time and money working to preserve and maintain this land that is open to the public. This land provides diverse plant, animal, fish, bird and insect communities and contributes to the Biodiversity of New Hampshire.

In stewarding this land GMCG will continue to encourage: