Tuesday, March 15: Salamander Crossing Brigade Volunteer Training
7:00 p.m.-8:30 p.m. on Zoom.
As the earth thaws and spring rains drench New Hampshire, thousands of amphibians migrate to vernal pools to breed. Sadly, many are killed when their journeys take them across roads. Every year, the Harris Center trains community scientists to serve on Salamander Crossing Brigades at amphibian road crossings throughout the Monadnock Region. These heroic volunteers move migrating amphibians across roads by hand during one or more “Big Nights” each spring, keeping count as they go. Attend this fun, information-packed volunteer training to join their ranks – or simply to learn more about the remarkable spring amphibian migration.

All are welcome! Learn more and register at harriscenter.org/salamander-crossing-brigades. 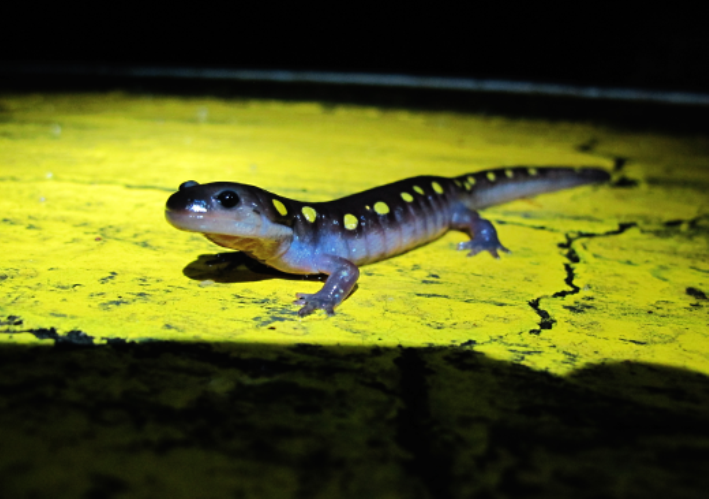 “March of the salamanders”

Before we know it, the spring amphibian migration will be upon us. Under the spell of warm spring rains, thousands of spotted salamanders, wood frogs, spring peepers, and other amphibians will emerge from the underground burrows where they have spent the winter and clamber through the forest – up to a quarter-mile, on tiny feet – to vernal pools and other wetlands to breed. Sometimes known as “Big Night,” it is a nocturnal affair of mythic proportions, and it is spurred by three elements acting in synchronicity: thawed ground, nighttime temperatures at or above 40 degrees, and rain after dark.

As one friend said, going out on Big Night is “like stepping into another world.” Except, of course, it is our world.

Like any hero’s journey, the migration is fraught with peril – particularly in places where frogs and salamanders must cross roads to reach their breeding sites. The statistics on amphibian roadkill are sobering: in Canada, biologists recorded an astounding 30,000 dead amphibians over the course of just four seasons along a mere two-mile stretch of road. Researchers in western Massachusetts concluded that roadkill rates even on rural roads were likely to lead to extirpation of local spotted salamander populations in as few as 25 years. It does not take a lot of cars to do a lot of damage.

As an individual, one of the very best things you can do for migratory amphibians is not drive on Big Nights. If you have got an errand to run and it is a warm, rainy night, ask yourself if it can wait. You could save the lives of scores of amphibians simply by staying home. The next best thing – especially if you are a night owl who does not mind getting a little wet – is to join the Salamander Crossing Brigades, intrepid crews of community scientists who move migrating amphibians across roads by hand, keeping count as they go.

For fifteen years, the Harris Center for Conservation Education has coordinated the Crossing Brigade effort in the Monadnock Region – complete with data forms, Salamander Crossing signs, frequent admonitions to never ever go out on roads at night without a reflective vest and bright flashlight, and even a five-day salamander forecast. 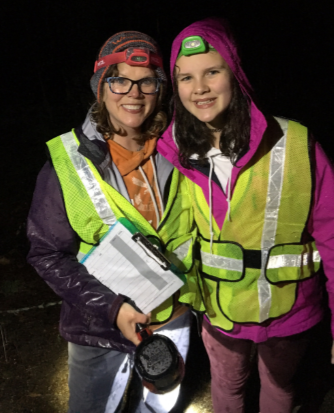 We have now trained nearly 1,600 volunteers, many of whom return, like the salamanders, year after year. Together, we have provided safe passage for 60,000 amphibians and counting.

A number of years ago, a fellow Crossing Brigadier affectionately referred to us as “slimy-fingered loonies,” a title we claim with pride. If you think you might like to be a slimy-fingered loony too, consider joining us for this year’s volunteer training on Tuesday, March 15, 2022 from 7 to 8:30 p.m. via Zoom. Although the Harris Center only actively coordinates volunteers in the Monadnock Region, the training will include helpful information for folks who would like to organize grassroots crossing efforts in other towns as well.